MIT Technology Review: This Doctor Diagnosed His Own Cancer with an iPhone Ultrasound

Earlier this year, vascular surgeon John Martin was testing a pocket-sized ultrasound device developed by Butterfly Network, a startup based in Guilford, Connecticut, that he’d just joined as chief medical officer. The device he used, called the Butterfly IQ, is the first solid-state ultrasound machine to reach the market in the U.S. Ultrasound works by shooting sound into the body and capturing the echoes. Usually, the sound waves are generated by a vibrating crystal. But Butterfly’s machine instead uses 9,000 tiny drums etched onto a semiconductor chip. It includes AI-powered software for acquisition assistance to help non-experts capture diagnotically accurate scans.

Forbes: An Entrepreneur Aims To Peer Inside The Body With A Small, Simple, Cheap Device

Usually, ultrasound scans are done with a machine big enough that it needs to be transported on a cart, with multiple attachments that must be switched out depending what part of the body a doctor wants to look at. But the iQ, a new machine from a startup called Butterfly Network, is a 300-gram, hand-held device with no attachments to swap that hooks up easily to an iPhone. The iQ seems to deliver clear images. Three outside doctors who’ve used the machine were impressed. It’s also simple to use [thanks to it's AI-power acquisition assistance]. I used it myself to view my carotid artery. Today, Butterfly is announcing that it is launching the machine with 13 different device clearances from the Food and Drug Administration.

Identifying and blocking adware, malware, and exfiltration of data requires a multi-tiered security approach. By investing in new detection methodologies that are constantly monitoring and analyzing web communications security teams are able to identify new actors and new techniques, reducing time to detection in their environments. Cisco Cognitive Threat Analytics (CTA) is a cloud-based service that discovers breaches, malware operating inside protected networks, and other security threats by means of statistical analysis of network traffic data. It addresses gaps in perimeter-based defenses by identifying the symptoms of a malware infection or data breach using behavioral analysis and anomaly detection. CTA relies on advanced statistical modeling and machine learning to independently identify new threats, learn from what it sees, and adapt over time.
Futher Reading:
Take incident response to the next level with AMP for Endpoints and Cognitive Threat Analytics, August 23, 2017, see the video
Cognitive Threat Analytics: Turn Your Proxy Into Security Device, September 19, 2016
AMP for Endpoints + Cognitive Threat Analytics = More Visibility than Ever Before, June 8, 2016
Cognitive Research: Learning Detectors of Malicious Network Traffic, September 3, 2015

Cisco Cognitive Threat Analytics is a cloud-based solution that reduces the time to discovery of threats operating inside the network. It addresses gaps in perimeter-based defenses by identifying the symptoms of a malware infection or data breach using behavioral analysis and anomaly detection. Unlike traditional monitoring and incident response systems, Cisco Cognitive Threat Analytics is not dependent on manual rule sets, but instead relies on advanced statistical modeling and machine learning to independently identify new threats, learn from what it sees, and adapt over time.

"Personalized Prosthetics: From Bytes to Bones", Siemens Pictures of the Future, The Magazine for Research and Innovation

Michal Sofka's work on 3D image segmentation at Siemens Corporate technology was featured in the fall issue of the Pictures of the Future magazine. New technology from Siemens makes it possible to integrate measurement data from diagnostic images with manufacturing instructions, thus potentially opening the door to automated production of custom-made prosthetic devices.
Futher Reading:
Image to Implant Process Gets Personal, June 19, 2015 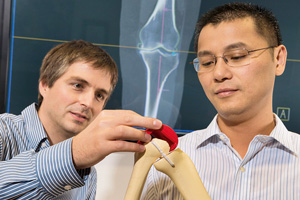